Over the next five years, the European Research Council (ERC) will provide an ERC Starting Grant of 1.76 million euros to support the outstanding research project of PD Dr. Benoit Merle, Chair of Materials Science & Engineering I (General Materials Properties, http://www.gmp.ww.uni-erlangen.de/). Less than ten percent of the submitted projects make it through the strict selection process. The ERC awards its funding annually to research projects with particularly high innovation potential.

Project NanoHighSpeed: High-speed deformation and failure of materials at the nanometre scale

How shock-resistant, how tear-resistant is a material? Can it be processed in a specific way? Is it reliable over a long period of time? Questions such as these occupy materials scientists on a daily basis – and sometimes even life depends on the answers, for example in aviation and automotive engineering. One of the most important modern methods for the analysis of materials is nanoindentation which can be used to characterize mechanical material properties at the most elementary levels – in the nanometre and micrometre range. However, it can only determine the mechanical properties of a material for a slow and controlled load – not in the event of impacts or collisions. Characterization methods are available which can reproduce high strain rates, as occur in the event of a fall or impact, but only on large, homogeneous samples.

But Dr. Benoit Merle wants to devise a method that can do both: fast and small. The aim of his project is therefore to develop nanoindentation as a new tool for experiments with a high strain rate – through simultaneous advances in hardware and experimental methods. The new process will be able to characterize millions of times higher strain rates than previous methods – at a scale that is millions of times smaller.

This has several benefits for materials science and industrial applications: reliability can be improved, wear can be reduced – especially for coatings such as those used on the display surface of smartphones. It is well known that this material often fractures under sudden stress such as when it is dropped to the ground. Hard material coatings for tools which extend their service life are also an important industrial application.

Finally, the process would help to optimise nanomaterials that are currently under development and that are to be used in the transport and energy sectors in the future. Here, too, Merle promises greater reliability and sustainability.

One of his first acquisitions from the Starting Grant funding was the prototype of an ultra-fast nano-indenter, which cost approximately a quarter of a million euros.

Benoit Merle, born near Montargis, south of Paris, graduated with distinction in 2005 from the École Centrale de Lyon in France. After several years as an engineer at Siemens AG, he obtained his doctorate on the mechanical behaviour of thin films under the supervision of Prof. M. Göken at Friedrich-Alexander-Universität Erlangen-Nürnberg. He then took over the management of the research group for nanomechanics in 2013. He spent the summer of 2018 at Texas A&M University for a longer research stay with Prof. George Pharr. During this time he designed the experimental approach used in the application for his current project. Back in Erlangen, he completed his habilitation in the field of materials science in May 2019. 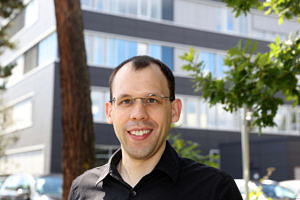